There are many opportunities for those who wish to capture images or movies of wild animals or nature scenes here at Sheoak Ridge Nature Reserve. Claire has worked with numerous film crews over the years, including hosting a BBC production crew at Sheoak Ridge while they used the location for a scene shoot in 2012.

In November 2014 Claire traveled to New Zealand to be the ‘talent’ (cave scientist) for a shoot for National Geographic. During 2011 Claire worked as a scientific advisor for Discovery Chanel in America, filming bioluminescent insects, known locally as ‘dismalites’, for the documentary “North America” (aired 2013).

Claire also worked as a scientific advisor for the BBC’s “Planet Earth: Caves” and “Life in the Undergrowth: Silk Spinners” from January-June 2005, including work in New Zealand and the UK. This job meant Claire was able to meet and work with her ultimate hero, wildlife presenter, Sir David Attenborough. Who wouldn’t want that gig as a job? 🙂

If you’re looking for someone to present a story in front of the camera, Claire has worked as a guest tv presenter for children’s tv shows Totally Wild (episodes on glowworms, caves and insects), Toasted TV (a special segment on stick insects) and Scope (an entire episode on insects). She’s also done scripting, editing and presenting work for the Tamborine Mountain Glowworm Caves and really enjoys working with professional film crews.

Some pictures from Claire’s consultancy work with documentary teams:

Cameraman Kevin Flay capturing footage for Life in the Undergrowth

Working with her hero, Sir David Attenborough was a dream job for Dr Claire. 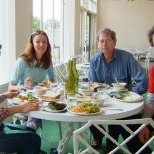 Breakfast with the BBC filming team. All filming was done at night (3.30pm-3.30am) and breakfast was usually at about 2pm each day. 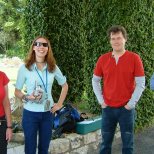 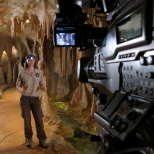 Dr Claire doing some presenting work for a doco on glowworms 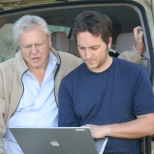 Sir David and assistant producer, Tim Green going over footage for “Life in the Undergrowth” while on location

Filming bioluminescent insects in Alabama, USA in 2011 with Discovery Chanel 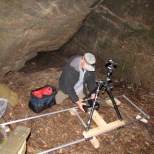 Setting up tracks for filming with Discovery Chanel

If you’re keen to get amongst nature to fine tune your photography skills, then you’ve found the right place. We’re not professional photographers ourselves, but we can run workshops at Sheoak Ridge with acclaimed photographer, Jurgen Freund (www.juergenfreund.com or see image below for details). A workshop at Sheoak Ridge gives you access to some of the most amazing animals of the tropics in a natural and picturesque setting.

All of the photos used on this website were taken here on Sheoak Ridge, mostly by Claire and Marcus – the one exception to this is the beautiful python photo on our Reptile page kindly on loan from our friends at Daintree Wonder Tours. We do have scrub/amethystine pythons here, but none of my photos were as crisp as that one! 🙂 We’ve got everything from charasmatic velvet worms (Peripatus), giant rainforest millipedes and centipedes, through to the larger and impressive amethystine pythons, lace monitors (goannas), striped possums, gliders…just to name a few. Birders will be happy to photograph spectacular species like the buff-breasted paradise kingfisher (Nov-April), rainbow bee eaters, sunbirds, scarlet honeyeaters, lovely & red-backed fairy wrens… the list goes on! We can guide you to find specific animals or if you are staying on the reserve, you are free to wander on your own. Please contact us via email if you’d like to do a fully guided photography walk on the property or if you’d like to stay at the reserve.

One thought on “Movies, TV & Photography”